NEW PATTERNS FROM AROUND THE WORLD JOIN DEVOTION

Carlsbad, CA – November, 2015 – With the introduction of three new Antique Mirrors to the Devotion color palette in early 2015, Oceanside Glasstile saw an explosion of interest in their art glass collection. As a result, this Fall they will launch three new patterns – Random Linear, Jali and Sirena – allowing for more creativity and customization as you journey from oceans deep to the bustling streets of Morocco. 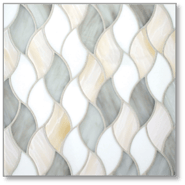 Jali in The Million Dollar Blend

All of Devotion’s 8 water jet and 5 hand cut mosaic patterns can be found for your free-play enjoyment in Oceanside Glasstile’s “Custom Mosaic” design tool located in the “Resources” section of the www.glasstile.com. The design program allows you to render myriad color combinations, create custom blends, and email client ideas for samples. There’s tremendous functionality in the design tools for all of their mosaic patterns including both art glass and molten glass product lines.

Answering the demand for more variety following the launch of their Offset 1x6, 2x6, and 3x6 patterns, Oceanside Glasstile’s final pattern in their Fall Collection is a Random Linear. Full of life and movement, Devotion’s art glass transforms the new Random Linear pattern into a bubbling brook or rolling coastal fog. The natural variation of the art glass creates a dynamic flow, and makes it an easy selection for both traditional and contemporary design. Random Linear is all about architectural repose. 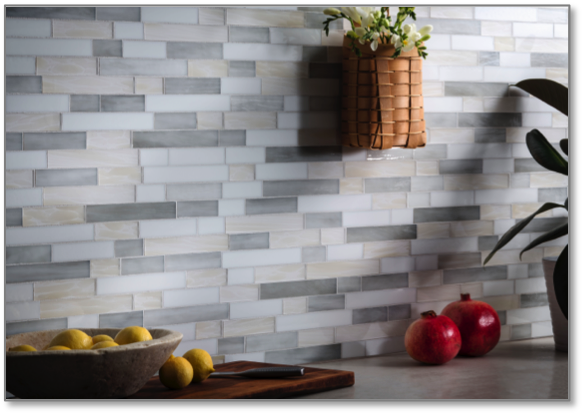 In keeping with true Oceanside Glasstile fashion, Jali is a traditional arabesque shape with a twist. Channeling a new Morocco, Jali’s interplay of large and small arabesques draw the eye in while the outlines offer a break from the standard repetitive pattern. Utilizing their water-jet capabilities, Oceanside Glasstile has created a unique network of pieces – intertwining two full body arabesques with a vine work outline. Jali is a new opportunity to create and push the limits of this traditional pattern.

Translating to “mermaid”, Sirena is an original pattern reminiscent of the mythos it was named after. Developed by Oceanside Glasstile’s Design + Merchandising Visionary, Cathy Aroz, “The proportion and scale of the organic shape allow it to fit well as a subtle texture on a backsplash or a larger focal point as art.” As a result, Sirena’s delicate petals seem to drift on their own up and down your wall. 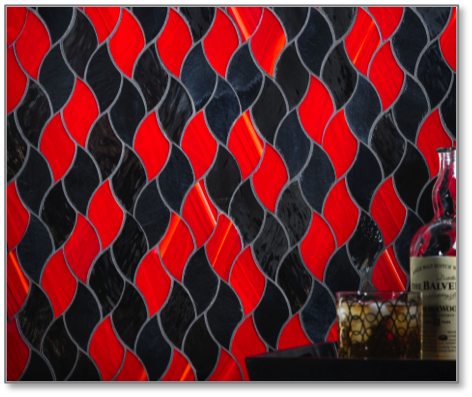 Oceanside Glasstile’s Devotion collection is a union of stained glass, water-jet technology and hand-cut artistry. With a color palette that ranges from bold jewel tones to earth inspired neutrals, the layering of texture, mirror and iridescent surfaces adds a three dimensional quality to any installation. Many of Devotion’s patterns have organic roots, such as Lotus and Mariposa, while hand-cut patterns City Lights and Zest play to a more modern trend. With an in-house water-jet machine, Oceanside Glasstile also has the capacity for completely custom projects. From restaurant and building signs to scaled renditions of their own patterns, Oceanside Glasstile’s design and engineering teams are ready to render special project requests.

For more information and to locate your nearest showroom, please visit www.glasstile.com or email PRServices@glasstile.com.